To share your memory on the wall of Coye King, sign in using one of the following options:

Coye was married for 61 years, 4 months and 12 days to Barbara Sue (Stephens) King. Coye worked for many years for National Cash Register (NCR) but in 1974 created his own business, along with Barbara – Cash Registers, Inc. (CRI). Through his remarkable business talents, CRI grew to become the largest cash register company in the state of Kentucky and at the time of his retirement in 1996 had 7 offices, in three states, with over one-hundred employees. During these years, Coye made countless friends in the business community and was well liked and respected. Coye was instrumental, along with a few other local business men, in the founding of what is now the Laurel-London Optimist Club and he served as the first president of that organization. He also served on many boards and committees for various businesses and organizations. Coye’s favorite hobbies were fishing, hunting, working with his hands and golf. He was known by many as a man that could build and fix anything. But what he enjoyed most was to spend time with his family and friends. Coye will be greatly missed as a husband, father, grandfather, great grandfather, brother and friend.

In lieu of flowers, the family requests a donation be made to the First United Methodist Church of London in memory of Coye Dean King.

Receive notifications about information and event scheduling for Coye

There are no events scheduled. You can still show your support by sending flowers directly to the family, or planting a memorial tree in memory of Coye Dean King.
Plant a Tree

We encourage you to share your most beloved memories of Coye here, so that the family and other loved ones can always see it. You can upload cherished photographs, or share your favorite stories, and can even comment on those shared by others.

Plant a Tree in Memory of Coye
Plant a tree 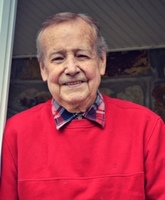