To share your memory on the wall of Ethel Hughes, sign in using one of the following options:

In addition to her husband, she is survived by three children: Sharon Hodge of Ashtabula, Larry (Sherry) Hughes and Richard E. (Deborah A.) Hughes, both of Sidney; siblings: Lillian New, Tuley Maxwell and June Baker, all of Sidney and Ruby (Jay) Barlage of Ft. Loramie; numerous grandchildren and great grandchildren; many nieces and nephews; and special friends of Ethel and the family: Rose, Lisa and Angela. In addition to her parents, she was preceded in death by one son: Larry Robbins; and one brother: Luther Maxwell.

Ethel was a member of Sidney Baptist Church. She worked at Copeland and later at Sidco, where she retired. Ethel loved to read, especially enjoying the newspaper. She also enjoyed doing puzzles.

Funeral services were held at 1:00 PM on Wednesday, September 16, 2020 at Sidney Baptist Church with Pastor John Butts and Chaplain Angela Barfield officiating. Burial was in Shelby Memory Garden in Sidney.

Memorial contributions may be made to Wilson Hospice or Sidney Baptist Church.

To send flowers to the family or plant a tree in memory of Ethel Hughes (Maxwell), please visit our Heartfelt Sympathies Store.

Receive notifications about information and event scheduling for Ethel

We encourage you to share your most beloved memories of Ethel here, so that the family and other loved ones can always see it. You can upload cherished photographs, or share your favorite stories, and can even comment on those shared by others. 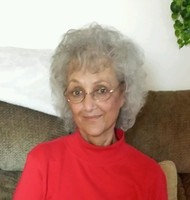