To share your memory on the wall of Henry Ashbrook, sign in using one of the following options:

Funeral Services were held Saturday, May 2, 2020 at 2:00pm in the chapel of the Hickman-Strunk Funeral Home with Bro. Eddie King officiating. Burial was in the Silerville Cemetery in Strunk, Kentucky.

Born in Russell Springs, Ky., on August 13, 1924, to Adonis Ashbrook, and Rosa (Chumley) Ashbrook, Henry was a member of the greatest generation, living through the great depression and helping to win WWII by his meritorious service In the US Navy. He proudly served in the Pacific, aboard the USS Franklin, the most decorated ship in history. Nicknamed Big Ben, the ship was one of 24 Essex Class Carriers built during WWII.

In March of 1945, while off the Japanese mainland, the Franklin was struck by two 500 pound bombs that hit the flight deck and penetrated the hangar deck. Six months earlier, the ship had been hit by a kamikaze plane, killing or wounding 120 crew members. The second attack on the ship ignited 31 fueled aircraft as well as most of the ordinance on board. Henry, who was an aviation ordinance man 3rd class, was below when the ship was struck. More than 800 men lost their lives. Survivors who managed to reach the flight deck had to climb hand over hand on a rope across raging waters to a rescue ship. Both the U.S.S. Franklin and Henry would survive. Henry received numerous medals and commendations for his bravery and service.

Henry returned after the war and took a job in the chemical department of the Formica Company in Cincinnati, Ohio. He resided in Cincinnati and Sunbright, Tennessee, and was married to Ruby Edna Burchell for 42 years until she passed in 1991. Time and circumstance would bring him to Stearns, Kentucky, where he met and married Fay Anderson and they began their lives together. Henry enjoyed trading, flea marketing, fishing, reading his Bible, and attending family gatherings. He was a member of First Hickory Grove Baptist Church, a member of the Kinne- Slaven Post of the American Legion, in Stearns, and Wartburg Masonic Lodge, in Wartburg, Tn., for over 50 years, and was a Kentucky Colonel.

To know Henry was simply to love him. Henry loved the Lord, his church, and his family. He led an extraordinary life, and his testimony, faith, and memories are what we will remember of Henry.

In lieu of flowers, donations may be made in Henry’s name to the following organizations:
First Hickory Grove Baptist Church
Stearns, KY 42647

To send flowers to the family or plant a tree in memory of Henry Ashbrook, please visit our Heartfelt Sympathies Store.

Receive notifications about information and event scheduling for Henry

We encourage you to share your most beloved memories of Henry here, so that the family and other loved ones can always see it. You can upload cherished photographs, or share your favorite stories, and can even comment on those shared by others.

Posted May 07, 2020 at 12:16pm
From your friends in the UKHC Finance Business Partners. We are praying for you and your family.

Posted May 05, 2020 at 11:24pm
He was a shipmate of my cousin, S2C Gordon Stripling, Jr., who was KIA on the Franklin. No words can express our appreciation to those of the Greatest Generation for their service and sacrifice in saving for nation from tyranny and evil. I offer my love, honor, respect, and thanks to the memory of Henry Ashbrook, and to his family. He rejoins his shipmates who made Jesus Lord in a grand reunion in the presence of Christ. God bless and comfort you all, Mr. Ashbrook is a real hero!
Mark Stripling
Ransom Canyon, Texas 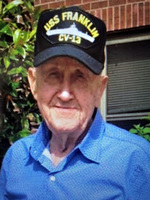