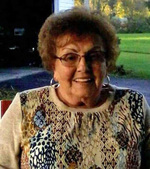 Jean Justus, age 81 years, 5 months, and 1 day, passed away on Monday, July 13, 2020 at her home in Stearns, Kentucky and was placed in the care of Hickman-Strunk Funeral Home.

Jean was born on February 12, 1939 in McCreary County to the late Charlie Vanover and the late Elsie (Crabtree) Vanover. She was the widow of Estel “Dick” Justus and a member of the Lower Hickory Grove Baptist Church. Jean worked for the McCreary County School District and was a secretary at the Eagle Elementary School. She loved computers, pictures, and spending time with her beloved family.

Hickman-Strunk Funeral Home was honored to serve the family of Jean Justus.