To share your memory on the wall of Pauline Jones, sign in using one of the following options:

Print
Pauline E. Jones of the Smithtown Community, age 96 years 3 months, and 23 days, went to be with the Lord on Thursday July 9, 2020 from her home with her family at her side and was placed in the care of Hickman-Strunk Funeral Home.

F... Read More
Pauline E. Jones of the Smithtown Community, age 96 years 3 months, and 23 days, went to be with the Lord on Thursday July 9, 2020 from her home with her family at her side and was placed in the care of Hickman-Strunk Funeral Home.

Funeral services were held at the Whitley City Second Baptist Church on Sandhill Road on Sunday, July 12, 2020 at 1:00pm with Bro. Mike Casada officiating. Burial was in the Hickman Cemetery in Stearns.

Born March 16, 1924 in Camargo, Kentucky to Earl Hickman and Delphia (Nevels) Hickman, Pauline was the eldest of her family and began helping to care for her siblings at an early age. She grew into a beautiful young lady and met and later married Schyler Jones Sr., on December 14, 1942 and the couple remained married for over 71 years until Schyler’s death in March of 2014. She and Schyler were exemplary Christians; they were faithful members of the Whitley City Second Baptist Church for well over 50 years. Pauline held the distinction of being the oldest member of Second Baptist Church. She taught Sunday school and Vacation Bible School and was a member of the Sunshine Sisters. She loved to quilt, cross stitch, garden, and cook for her family. A talented seamstress, she also made her children’s clothes when they were growing up. Pauline also was renowned for her butter making skills. People came from all over to buy her butter.

Pauline lived simply and quietly in service to her Lord and Savior Jesus Christ, her family, her church, and those around her. She leaves a lasting legacy of Christian love and commitment. She looked well to the ways of her household and lived out her faith. Pauline was a genuine Proverbs 31 woman. She will be sorely missed, but warmly remembered.

To send flowers to the family or plant a tree in memory of Pauline Jones, please visit our Heartfelt Sympathies Store.

Receive notifications about information and event scheduling for Pauline

We encourage you to share your most beloved memories of Pauline here, so that the family and other loved ones can always see it. You can upload cherished photographs, or share your favorite stories, and can even comment on those shared by others.

Posted Jul 10, 2020 at 01:55pm
Mrs. Jones was the sweetest little lady you would ever meet, she was such a blessing and will be missed by all who knew her. Prayers for all the family we love you all.
The Lloyd Family
Comment Share
Share via:
TJ

Schyler, Sharon, Brenda, and families you are in my thoughts and prayers. Wishing you peace to bring comfort, courage to face the days ahead and loving memories to forever hold in your hearts. Prayers for all the family. 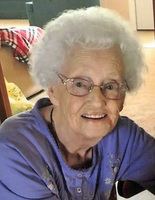