To share your memory on the wall of Susan Waters, sign in using one of the following options:

Susan was born April 3, 1942 in Whitley City to Walter Earls and Dora Allen Earls. She was a member of the First Hickory Grove Baptist Church and had worked as a sewing machine operator making tents and at McCreary County Preschool before her retirement. Susan loved travelling, camping, and spending time with her family.

To send flowers to the family or plant a tree in memory of Susan Waters, please visit our Heartfelt Sympathies Store.

Receive notifications about information and event scheduling for Susan

We encourage you to share your most beloved memories of Susan here, so that the family and other loved ones can always see it. You can upload cherished photographs, or share your favorite stories, and can even comment on those shared by others.

Posted Apr 18, 2020 at 04:21pm
In honor of the greats. Go rest easy with your brothers and sisters that have gone before you. Love you Aunt Susan!

Posted Apr 17, 2020 at 05:48pm
Aunt Susan, you will be missed. I remember the times growing up with you and the time we spent at family reunions. Say hello to the rest of the family in heaven.
Comment Share
Share via:
MP 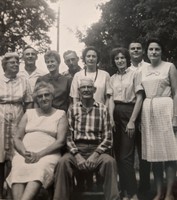